For those who can’t make it to Rahway, NJ, this weekend, livestreams will be available for the preshow and the festival shows. Go to StageIt.com/ProgStock to purchase tickets and stream the shows.

EFFECTIVE FRIDAY, MARCH 11, PROOF OF VACCINATION IS NO LONGER REQUIRED FOR ENTRY TO THE UNION COUNTY PERFORMING ARTS CENTER.

SIMILARLY, MASKS ARE NO LONGER REQUIRED, THOUGH THEIR USE IS STILL STRONGLY ENCOURAGED.

PLEASE STAY HOME IF YOU ARE FEELING SICK!

If you feel sick, have a fever, or are experiencing any COVID-19 symptoms, we ask that you make your health, and the health of others, a priority by staying home.

If you have purchased a pass, and you are not feeling well and need to stay home – or in your hotel room – ProgStock will offer you free livestreaming for the show or day of shows you will miss due to illness. Please contact Ann Rinaldi (marketing@progstock.com or 252-402-5395 – emails and text messages are more likely to be received on show days) for instructions and your free livestreaming pass. If you already have a StageIt account, please send her your StageIt username or the email address you use for StageIt.

ProgStock 2022 is the sixth edition of an annual volunteer-run event whose mission is to shine light on one of the most exciting and creative genres of rock music, Progressive Rock.

The three keys to our festival, in our humble opinion, are:

Something interesting you might not know about ProgStock, even if you’ve attended before: we encourage all of our musicians to stay for the entire weekend. Why?

Once popularized in the late 1960s and early 1970s by bands like Yes, Genesis, Jethro Tull and Rush (to name but a few), the genre has spawned hundreds of bands all over the world ever since its heyday. Despite the near-demise of the record industry that once exposed this music to the masses, artists from all over the world have continued to create this kind of music and have found audiences that cherish it and crave for more.

So, why should you come to ProgStock?

Since 2017, ProgStock has provided a vehicle for these artists to play to audiences and in surroundings that they might not be able to achieve on their own. In that spirit, ProgStock provides its international audience (which includes visiting patrons from Europe, South America, Canada, and elsewhere) with a varied menu of Progressive Rock acts from all over the world (when we can). Although there are (and always will be) many American bands on our roster gaining this valuable exposure, we also try to include some examples of international acts that are either less well-known in the USA and deserve the chance for international exposure, or are seasoned performers with a rich history of musical achievements, as incentive for more patrons to attend the festival. It is exactly the mission of ProgStock to bring such music to our stage, because we strive to be one of the few places in the USA where such music can be experienced by our audience.

ProgStock’s daily performances take place at the Union County Performing Arts Center (or UCPAC) Main Stage theater located at 1601 Irving Street, Rahway, New Jersey 07065. This historic landmark was originally a vaudeville-era silent movie house. First opened in 1928, it is now a beautifully restored multipurpose facility that is the centerpiece of the recently established arts district of Rahway. UCPAC is playing a vital role in the cultural renaissance of the community. The theater is run by a non-profit organization staffed by professional, hard-working employees and is supported by an outstanding volunteer corps and its local community of residents.

After each performance, meet-and-greet sessions with the performers take place behind the theater building in our meet-and-greet tent. You do not need a special pass to attend the meet-and-greets. Everyone is welcome! We bring a selection of each artist’s or band’s merchandise out to the tent, so you can pick up that last-minute CD, LP or poster to get signed, and our annual festival program is filled with autograph pages for each band, so you don’t have to purchase anything to get autographs from every band. In 2022, we are including the festival T-shirt, poster, and program in the price of all 3-day passes, so everyone who purchases a 3-day pass will have an autograph book!

Our Late Night Events now take place right within the Main Stage building, so there’s no need to walk anywhere else to enjoy the festivities! Other locations within downtown Rahway will host our outdoor activities, all within a short walking distance of the theater. We’ve tried to make it easy to enjoy what our festival has to offer you…but, if the spirit moves you, there is the rest of the exciting city of Rahway for you to explore!

ProgStock is the American Northeast’s only Progressive Rock music festival, due to the relocation of another storied music festival, RoSFest, from Eastern Pennsylvania to Florida. We are located in the tri-state area conveniently close to New York City, which attracts patrons and performing artists from all over the USA and the world. Just a 15-minute train ride from Newark Airport with a NJ Transit station conveniently located right in the heart of the city, you can get to Rahway from anywhere in the US or the world without needing to rent a car and even make the festival part of a larger trip to NYC, if you’re so inclined. Check out our list of area hotels to see how many great places you can stay in the Rahway area.

If you have your own vehicle while attending ProgStock, you can drive to the theater each day and park for free in the large parking lot at the Hamilton Stage building a short walk away from the Main Stage theater! Otherwise, you can always carpool with friends…you will see plenty of familiar faces and make plenty of new friends at this festival! Some area hotels may provide shuttle services you can use to get to/from downtown Rahway. Taxi services will be quite aware of the festival and easy to grab (our staff will help you, if needed). Uber and Lyft are available, too…it’s a commuter town, after all! Cost estimates between UCPAC and most area hotels are around $6 (car) and $10 (SUV)…and, at any time of day or night (which is an important thing to consider!). Share any of those rides with friends, and you’ll do just fine!

We continue bringing new experiences to the festival to complement the performances, including special guest appearances and meet-and-greets, fine artists, and the involvement of sponsors and foundations related to music education, historical preservation, and support of independent musical artists. We could not have produced any of these without you, and for that we are eternally grateful!

In case you missed them, we recently made some HUGE announcements!

We have booked The Zappa Band for Friday night’s headliner! You may have heard that ProgJect dropped out due to scheduling issues. Well, we are thrilled to have The Zappa Band to fill their time slot, which also means that the great Mike Keneally will still be joining us!

A festival friend, the fabulous Michael Sadler will also be joining us to take part in several great performances at the festival, and we have added a special set by the amazing Mr. Matt Dorsey.

If that wasn’t enough to get you going, we also announced that the incomparable Rachel Flowers has been working to build an all-star band for her set this year.

So, enough with the adjectives (great, fabulous, amazing, incomparable, all-star). It’s time to buy your passes –>

Every band participates in a meet-and-greet open to all passholders and our festival program (free with all 3-day passes) doubles as an autograph book.

We will also have exhibits and special features from fine artists Paul Whitehead (cover artist for Genesis and Van de Graaf Generator) and Deane Arnold (pumpkin sculptor who has been featured on the Food Network), as well as the Bob Moog Foundation.

NEW BAND ANNOUNCEMENT!
Joining us from the UK (and Norway)… IO EARTH and Dave Cureton!
We have been dying to tell you about this for months, but bringing bands from overseas is a complex process, as you all know. We are thrilled to be able to finally announce that the ProgStock Festival 2022 lineup will include these two amazing acts! 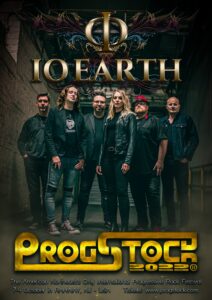 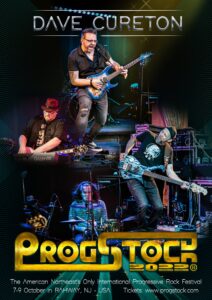 All Passes on Sale in our Box Office

ProgStock Producer Thomas Palmieri was joined by Mark Monforti of Progrock.com, the US label manager for Unitopia, on The Waiting Room with The Prog Doctor on House of Prog with Marty Dorfman to discuss the status of Unitopia. We’ve created this clip of the show, so you can hear what Mark & Tom said on the air about Unitopia’s appearance at ProgStock. There’s some good news and some not-so-good news. Have a listen.

Available NOW and anytime before October 7, 2022

A ProgStock 5-Year Patron may select any available seat within our theater and reserve it for 5 years, starting with this year’s festival. Patrons receive a three-day pass to the festival and are also entitled to these amazing perks:

You know you want to join the club!